Crossing over to Khandala

There is always a rush to the hills when there is an impending long weekend break. Well , there was no long weekend approaching, though this year 2014 seemed to be a startling example of one with plenty! We were in the midst of Ganapati Visarjan and reports started to slowly trickle in of how the last day we would witness 1 Lakh immersions across the city. Every other evening , we would be witness to long traffic jams and drums rolling at unheard of decibel levels. There was a mandap (stage) of sorts erected within my residential complex so we were to grin and bear it for the 5 days of festivities.

Whats this got to do with Khandala ..everything ! Consciously decided during one such 7th or 9th Immersion day that there was no point trying to put up with it since exams were around the corner and not much was being achieved that a getaway was on the cards. With discussions heating up on the preparedness of the city and the roads diversions to take place, we decided that Khandala would be favourable in the rains and allow us to avoid the city all together.

We left Mumbai around 7 am and reached the Ghats at 9 am. We took a quick diversion at lonavala market place for pawna dam. The initial roads were bad and then finally the drive to the lakeside was gorgeous. We had setup a meeting with a plot owner and also to view the prospects of owning and investing in pawna for a few years. Well, the meeting went off well with rain drops falling on our heads and clouds all around us. Kids were getting restless and tired and it was a task to navigate ourselves back to Old khandala road.

Once, we got to Old Khandala road, the resort had a wedding entourage moving out and the single pathed road to the lobby was blocked by the wedding guests huddling before the final goodbyes. We decided to return back to Khandala and scout around for another hotel to stay put for the night. After all it was only a single night and with heavy rains I was not too keen to discover Khandala and its long winding roads dotted with scanty hotels.

We arrived at Sarovars. Wearing a bare deserted look, we entered with some trepidation. However, we did find a manager and the rooms were surprisingly available. Lunch was on the cards first followed by the room discussions. At lunchtime, both my daughters turned on the mac to relook for another place to stay the night and we knew that this place with its teeny weeny pool or pond as my daughter clarified was not going to be booked. After much thought, i checked with our previously booked Hotel to find out if the hotel wedding guests had indeed departed. The manager was very welcoming and assured me the entrance had been cleared up and no issues with parking either.

We crossed the railway tracks at Khandala hopefully one last time and drove straight to the hotel premises. The check in was smooth and the room was spacious and neat. After a few hours of much needed rest, we took the kids to their wonderful pool. The water was clearly chilly and the kids managed to swim around for only a short while.

Dinnertime at the houseboat with an aquarium at the bottom was such a contrastingly peaceful experience from what we had left far behind. Barbeque for dinner was really outstanding and this was just totally unexpected. See below a shot of the houseboat taken in daylight.. 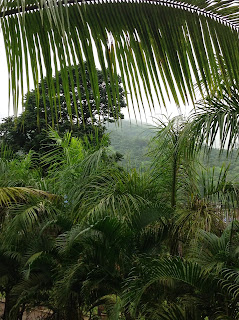 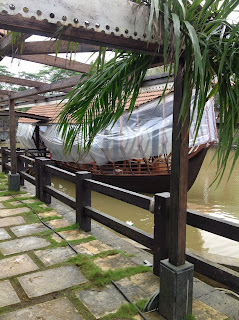