The year is 2008.The olympic year for China. The destination is Shanghai which is the tourist destination for many setting their eyes on this oriental fantasy. The trip can be different if its unexpected on so many levels..Where you plan to stay, who you plan to holiday with and whether you have ever visited the place before. In this case, all 3 parameters have been met with complete surprise..Mother in law accompanied me to Shanghai and we stayed at her friends place (how she has a friend there and we dont is not a surprise!) and have never visited Shanghai before so this was a definite new for me.
Traveling to any chinese city for the first time can a bit daunting since they do not communicate in english and one does not meet any possible translators at any given point anywhere ! The sheer size of their cities, their physical prescence everywhere and the language barrier can all be a bit much to digest but since I have been residing in Beijing for the past few months, we had arrived at a certain level of expectancy with the locals.
The weather when we landed seemed gloomy with a slight overcast but we had no idea this was to be the forecast for the next few days of our short trip.
We cabbed it down to the address we were given and reached old Shanghai soon enough. Like any regular chinese complex with a massive gate and sprawling gardens we decided to relook the building number before trying to second guess the chinese letters.
After the traditional warm indian greetings , we planned our next few hours with our gracious hosts. We set out by the local metro for the Xujiahui Catholic Church, located at Puxi Street of Shanghai’s Xuhui District.

It is the largest Catholic Church in the city and China’s first western style church, before reaching the famous Huangpu River front.

At Xujiahui Church as we were guided through the history and its structure, we posed for snaps before taxing it to continue our journey. We walked, shopped and just took in the many sides to the evolving Shanghai. Tall glassed commercial buildings on one side and the bits of history and old world charm on the other side. Both looking content and unopposing! Situated on the Huangpu River and running from Suzhou Creek to Shanghai Harbour Passenger Terminal, the Bund is one of Asia's most famous streets. The weather did seem to threaten to rain on us so i was not keen to cruise to the other side.

My mom in law, Aunty Fleur David and myself decided to cab it back and through the journey we were still absorbing so many of the odd and unique architectural sights in Shanghai. Quite an overload for an evening and quite a contrast to Beijing. Beijing far more spaced out with cleaner edges and greener spots than Shanghai could boast of but was later told that the commercial side to Shanghai was really the more talked about and visually appealling side to Shanghai.
All night we slept through the claps and ferocious rolling of thunder clouds! It was a sight to behold. But we were to get plenty of that through the following day. The next morning, we headed to the Yuyuan Garden, a famous classical garden located in Anren Jie district. It was finished in 1577 by a government officer of the Ming Dynasty. There are many attractions to this garden and each area has its own unique characteristic. 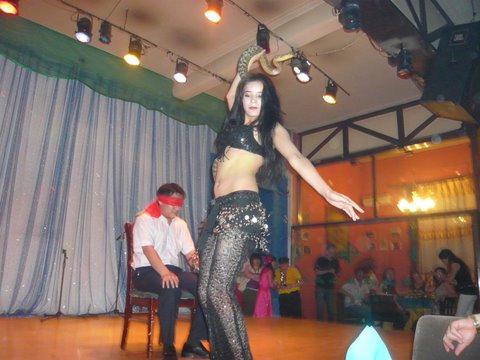